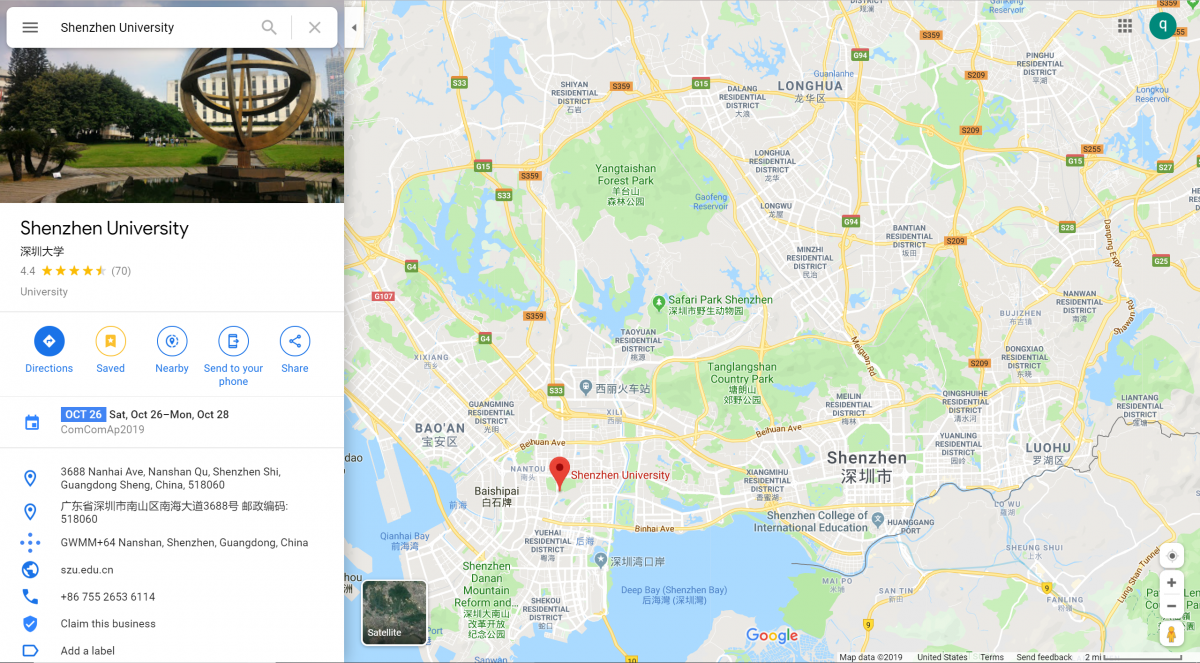 The IPIC 2020 conference will be held  at Shenzhen University in Shenzhen, China.

Shenzhen, the one-time small fishing village, singled-out by late Chinese paramount leader Deng Xiaoping, the chief designer of Chinese reform and opening, is a so-called one of the Special Economic Zones in China originally established in 1978. Now, Shenzhen has developed into an international city with great influence, creating the “Shenzhen Speed” which attracts worldwide attention. Meanwhile, Shenzhen enjoys the good fame of City of Design, City of Piano and City of Maker.

Shenzhen is located at the forefront of the Pearl River Delta and borders on the New Territories of Hong Kong in the south, Daya Bay in the east, the outlet of Pearl River and Dongguan and Huizhou in the north, being an important coastal communication hub in South China. Covering an area of 1997 square kilometers, with a population of 13 million, Shenzhen has the highest population density of major cities in China.

Shenzhen University (SZU) is located in China's pioneering city of reform and open-up —— Shenzhen. Known as “the Special Economic Zone University, the Window University, the Experimental University,” SZU has grown into a multi-disciplinary university hosting over 34,000 students, 3,770 faculty and staff members since it was founded in 1983. SZU, characterized by its youthful vigor, beautiful campus and rapid growth, offers bachelor, master and Ph.D. degrees in a wide range of programs. SZU emphasizes both teaching and research. It not only strives for academic influence, but also seeks to make positive contributions to society.

One of our goals is to nurture students’ innovative and entrepreneurial spirit to boost social, economic and cultural prosperity in the Greater Bay Area of Guangdong, Hong Kong and Macao and beyond.Distinguished alumni of SZU include Ma Huateng, Zhang Zhidong, Chen Yidan, Xu Chenxi, Shi Yuzhu, etc.

SZU is accelerating its pace toward rich diversity and robust internationalization. With over 200 overseas partnership universities, SZU attracts about 1,500 international students every year. SZU is committed to building an innovative, high-level and internationally prominent university.

Shenzhen is the only city in mainland China that has sea, land, air and railroad ports of entry.The number of ports here ranks first in China. Its seaports are especially developed. The Shenzhen Port ranks sixth among world container ports. Shenzhen’s container shipping handling capacity continues to rank third among the world’s ports. Luohu Port is the largest land passenger port in China and Huanggang Port is the largest land freight port.

Besides the ports, Guangshen and Jingjiu railways link Hong Kong, Shenzhen and inland cities.Shenzhen’s Bao’an International Airport is one of mainland China’s four biggest airports.Shenzhen’s foreign trade exports have ranked first among mainland China’s cities for 23 years in a row.