Logistics in the Netherlands

"The Netherlands, Gateway to Europe"

The logistics sector is of enormous  economic importance to the Netherlands. The sector generates 55 billion euro annually and provide employment for 813,000 people. Above all, it is an important service that is an integral part of all other economic sectors. In the Dutch Institute for Advanced Logistics (TKI Dinalog), knowledge institutes and industry work together on innovative logistics concepts, such as synchromodal transport, urban distribution, e-commerce logistics, and crosschain collaboration.

The city of Groningen is the capital of the province of Groningen, the north easternmost province of the Netherlands. The largest (185,000 people) urban center in the area, it is a relatively undiscovered and unspoiled part of the Netherlands that has kept most of its authenticity. Besides being a student city with circa 50 000 students, Groningen is also ahead in the areas of research, innovation and entrepreneurship.

Groningen is an attractive city with a level of facilities that can only be found in major cities. Institutions such as the University, the University Medical Centre,  the Hanze University of Applied Sciences, the headquarters of N.V. Nederlandse Gasunie and the Groninger Museum, make Groningen the regional centre for more than half a million people. The local governments, companies and knowledge institutes have created a climate of cooperation, allowing startups to excell. Collaborations and initiatives such as Groningen Digital City, City of Talent and Top Dutch makes the city a perfect place for all kinds of businesses and startups. With a good geographical location and connections via two seaports, inland ports, railways, canals, an airport and different highways, the province offers many possibilities for innovative logistics companies and initiatives.

The city of Groningen has a long history as a trading town and fortress, which is still visible from historic warehouses, courts and other buildings. Groningen has the highest usage of bicycles for transportation in the world. Within its boundaries, Groningen has historic warehouses, courts and buildings as well as plenty of modern architecture. The center of Groningen has been preserved and its attraction lies in a contrast between old and new Groningen. Groningen's main attractions are the 13th century Martinikerk and the Renaissance Goudkantoor at the Grote Markt. Cars are banned from the picturesque historic centre. Part of this area was destroyed during WWII; however, many of the medieval and 16th and 17th century structures survived. 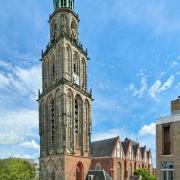 The city's landmark is the Martini tower which has overlooked the city for over 750 years. Visitors can climb this fourth-highest tower of the Netherlands up to the third gallery to get a spectacular view across the city. Adjoining the tower is the Martini church, the largest in Groningen. It originates from approximately 1230 AD and contains frescos from the 13th century and one of the largest Baroque organs in northwest Europe. Two other main attractions are the beautifully designed central squares: Grote Markt and Vismarkt.

Museums in Groningen include the Dutch Comic Strip Museum, Nautical Museum, Graphic Arts Museum, and the University with its extensive collection of instruments and objects used at the University of Groningen, including material for medicine, biology, physics, and psychology. The collection also includes minerals and fossils, in addition to prints and costumes. 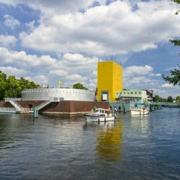 Art pervades the city, even in the train station with its magnificent stained glass windows. The Groningen Museum, designed by the Italian architect Alessando Mendini, is opposite the train station and houses a permanent collection of 17th-century works (including Rubens' Adoration of the Magi), Hague School paintings, ceramics, modern art, archeological artifacts as well as works by Groningen's expressionists De Ploeg group. Surrounded by water, the museum looks like a sea-going vessel. Groningen has a considerable amount of modern architecture that goes hand in hand with historic architecture. There is an Italian link, proven by the fact that many of the most remarkable buildings in the city were designed by Italians.

The Prinsenhoftuin Garden, which includes a rose garden and an herb garden, is one of the best examples of a Renaissance garden in the Netherlands. It is open from early April through mid-October. Established in the 17th century, Hortus Haren has many interesting attractions. Coffee bushes, cinnamon trees, vanilla orchids and bananas flourish in this tropical rainforest environment. Get close to the collection of tropical insects in the insectarium or relax in the Chinese garden, a replica of a Chinese Mandarin's Feng Shui garden from the Ming Dynasty. 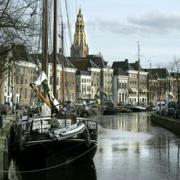 Groningen was once bordered by a canal. Currently, there are houses, old warehouses, offices, and works of art on both sides of the canal and guided canal walks are available.  If one prefers to explore Groningen from the water, there are several options including a guided boat tour on the canal or a do-it-yourself canoe trip. The 't Peddeltje canoe hire is located under the Herebrug bridge; pedal boats are also for hire here.

In order to bring the IT sector from good to excellent, entrepreneurs, know ledge institutions and governments have joined forces in the Groningen Digital City action plan. This action plan forms the basis for the development of a healthy and futureproof digital economy.

Nowhere in the world is cycling as popular as in Groningen. No less than sixty percent of all traffic movements is by bicycle. Clear choices are essential if this is to be extended any further. In Groningen we have a long tradition of a good and clear cycling policy. That’s a tradition we wish to continue in order to keep the city economically vital, accessible and healthy. We are therefore giving bicycles more room than ever before. The growing number of city residents naturally translates into more bicycles, while new developments such as pedelecs are making bicycle paths busier.